Unveiled to the public for the first time in 2006, the Jeep Compass sold well over the years.

And 10 years after its debut, the 2016 model sold better than ever.

With so many crossovers available on the market, it was hard for the small Compass to keep up, however, it was one of the most affordable choice among the others.

The 2016 model was a 5-passenger crossover that was available in two trim levels: Sport and Latitude. The Sport SE and High Altitude Edition sub-trims added features to both trim levels.

Stand-alone options for the Sport trim level included full power accessories and some of the Latitude’s standard features.

Several packages were available for each trim level and added from a better sound system to a sunroof, bigger wheels, a rearview camera to increase safety and many others.


Safety wise, the Compass included antilock brakes, stability and traction control, frontal airbags, side curtain airbags and disc brakes in the front for the all-wheel-drive models. 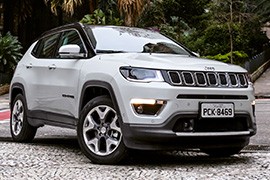