The Cherokee is probably one of the best known models for American company AMC. The model that started out production in 1984 is actually the second generation, the one called the XJ, the successor of the SJ. It was the first unibody (monocoque) car made by Jeep. The XJ has a more European feel due to the implication of the engineers over at Renault in the development of the car. The Cherokee Xj was offered in 2-door and 4-door versions. The XJ was replaced later with the XJC (Grand Cherokee).

The 1984 Cherokee was the one to revolutionize the American SUVs, having a shorter wheelbase and a shorter length, thus being lighter a weighing 1000 pounds less compared to its predecessor. A pick-up version was also released and was named Jeep Cherokee Comanche.

The car’s interior was nothing luxurious, rather very well thought to suit the needs of the buyer. It was a basic, functional interior.

The Cherokee was available in three trim levels: Base, Pioneer and Chief.

The Cherokee was offered in both three- and five-door configurations, each having the same track and wheelbase. There were 13 trim levels to choose from including limited editions like the Pioneer Olympic Edition and the 60th Anniversary, which came with special badging and carpets, air conditioning, and other special features. 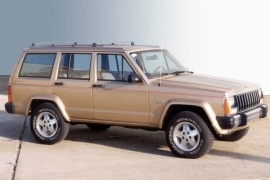