Even though Jaguar was known for creating luxury vehicles, the British carmaker didn't step back from offering some interesting station-wagons, such as the 2020 XF Sportbrake.

The XF was designed and launched at the end of the Ford period, and it was based on the same platform as the S-Type. But that was more than 12 years before the introduction of the 2020 XF range and, moreover, the station-wagon version. A version which was named Sportbrake.

While the Shooting-brake was a name given for the station-wagons built upon a 2-door version of a car, the Sportbrake was intended to be the station-wagon of a 4-door coupe vehicle. Unlike other carmakers, Jaguar didn't want to say that its two-box vehicle was a shooting-brake. It kept the same front fascia, but from the A-pillars behind, everything was different. The longer roof-line, the raked D-pillars, and the tailgate confirmed a more practical version of a luxury 4-door coupe.

The new interior was noticeable, mostly due to its new technology. The manufacturer installed an 11.4" curved-glass HD touch-screen on the dashboard in an elegant magnesium alloy casing. It controlled the new Pivi Pro infotainment system. For the seats, the 2020 XF Sportbrake was available with wider seats and with massage function.

Under the hood, the car was enhanced to comply with the Euro 6D norms. The diesel engine was fitted with a starter-generator system that helped the vehicle achieve better fuel efficiency and lower the CO2 emissions. For the gasoline versions, the XF Sportbrake was offered with two versions of the 2.0-liter unit that delivered 250 hp and 300 hp, respectively. 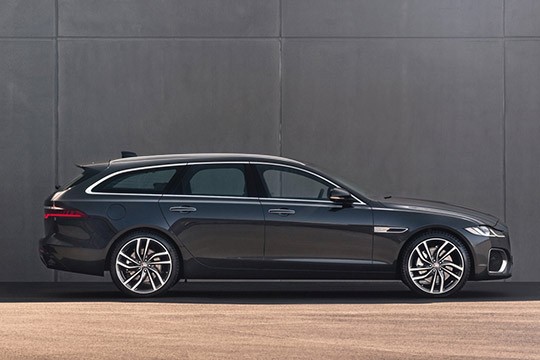 3 Jaguar F-Type Project 7 Has All It Takes to Be a Future Classic, Can Also Be Tame