Isuzu tried to expand its market presence, and a large off-road vehicle seemed to be the best choice.

But the result was far below the expectations.

When General Motors and Honda Motor Company decided to help each-other on building cars, few models emerged from that agreement. The agreement stated that the Japanese car-maker had to deliver the engines, and General Motors will deliver the chassis, and Isuzu will bring its diesel engines to the table. The American company had a third of the Isuzu shares. On the other hand, Isuzu was allowed to build the Oasis, which was the Honda Odyssey MPV, and the Trooper, which was offered on specific markets. It was a mix of badge-engineering between the two car companies that involved more brands.

GM designed the two-box design of the big Isuzu Trooper, and it was similar to the Acura SLX and Opel/Vauxhall Monterey. The car featured body-on-frame construction, with a low range gear fit for off-road. The front fascia was redesigned according to Isuzu specifications, but mostly only the grille was different than the one found on the Acura SLX or Opel/Vauxhall Monterey (European and U.K. versions).

Inside, the base model featured cloth upholstery while the upper trim level received leather. The instrument cluster featured the same layout as Opel/Vauxhall, with six gauges and the tachometer and speedometer larger than any other gauge, with the indicators for the automatic transmission between them.

Isuzu was allowed to fit its cars with the entire engine lineup. Unlike Honda, which sold the Acura SLX exclusively with their V6 engines, Trooper featured gasoline and diesel engines. 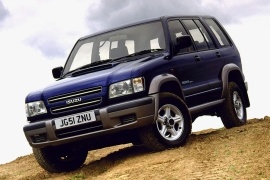