Isuzu brought a new pickup on the market, and it made it available for the European continent as well.

It was available with three cabin options, with the Crew-cab as the top version.

At the same time, when Isuzu was selling the rebadged 5-door Opel Frontera in the U.S. as the Isuzu Rodeo, the same name was used to sell the D-Max pick. The vehicle was a joint effort together with GM. Basically, the frame was also used by GM for the Chevrolet Colorado pickup, but Isuzu took a different approach for other countries' versions. Manufacturing was in Thailand and, later on, in Turkey, at their joint-factory in Bursa with AIOS Turkish company.

Unlike other crew-cab pickups, Isuzu named this way its four-door version. It offered the same dashboard design with a tall center stack where it installed, depending on the trim-level, an aftermarket CD-player. The rugged buttons and the industrial design were fit for the hard-working vehicle, which was able to cope with hard offroad situations.

Even if there was only one engine under the hood, a 2.5-liter turbodiesel, there were different bodyworks available, one of them being a single cab with a longer loading bed. It had two doors and, unlike the crew-cab, had two seats. The crew-cab was intended as a workhorse, with limited comfort for the rear passengers, but able to carry over 1-ton payloads. Isuzu updated it constantly to fit into the European emission regulations. The Japanese carmaker used the Rodeo name for D-Max only on specific markets. 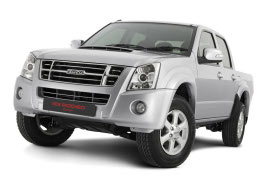