When Isuzu tried to get more traction on the U.S. pickup market, it entered with the I-Series in a few body versions, including the Double-Cab.

Thanks to its agreement with General Motors, Isuzu started to sell a rebadged Chevrolet Colorado in 2005. Its hopes crumbled very soon since the bow-tie brand had a much better brand awareness than the new Japanese brand. And, as a final hit, the world financial crisis struck so hard that Isuzu asked GM to stop producing the I-Series in 2009, after four struggling years.

The design might be one of the most intriguing parts of the vehicle. The profile looked just like its American siblings, but its front side was shocking and not in a good way. Its headlights were carried-over from the GMC Canyon, but the grille was typical Isuzu with a few extra horizontal and vertical slats. At a glance, it looked like the design team used duct tape to keep the front face in place. Due to that, most customers barely saw the four-door cabin with a strange badge at the front as a true alternative for any other American pickup.

Inside, the I-Series featured an identical dashboard as its brothers, apart from the steering wheel's middle part, which featured the Isuzu lettering instead of GMC or Chevrolet. In the back, it offered room for three adults on a folding bench, which covered the jack and a few tools. In the four-door version, the I-Series featured air-conditioning and power windows for everyone. But Isuzu couldn't sell 1,500 units in four years, convincing the Japanese management to drop the ball. 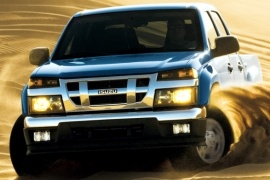