Isuzu tried again to get a slice of the light-utility pickup-trucks in the U.S. with the 2005 I-Series, but it failed again and eventually quit in 2009 after disastrous sales.

Maybe it wasn't the right time to introduce a new pickup on the American market, but in 2005 nobody could tell for sure that 2008 will bring a global financial crisis caused by the U.S. bankers. General Motors and Isuzu joined forces in developing a new platform and shared parts for a light pickup. While the Chevrolet Colorado was a good bet, the Isuzu I-Series didn't get enough sales, even if it tried to offer the vehicle in a few body choices to cover all the needs. The Japanese-branded version was offered as a Crew-cab and Extended-cab with four doors.

The design might be one of the most intriguing parts of the vehicle. From the profile, it looked just like its American siblings, but its front side was shocking and not in a good way. Its headlights were carried-over from the GMC Canyon, but the grille was typical Isuzu with a few extra horizontal and vertical slats. At a glance, it looked like the design team used duct tape to keep the front face in place.

Inside, the I-Series featured an identical dashboard as its brothers, apart from the steering wheel's middle part, which featured the Isuzu lettering instead of GMC or Chevrolet. Since the American brand was far better known in the U.S. than the Japanese brand, it was easier for them to sell more and offer better discounts for volumes. That said, the Isuzu had to bail out after selling less than 1500 units in four years. 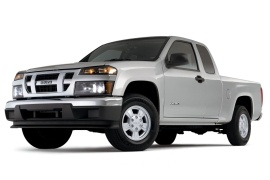