Isuzu refreshed the D-Max pickup in 2015, preparing it for the Euro 6b emission standards, and it slightly modified the exterior as well.

While most carmakers relied on the AdBlue (Diesel Exhaust Fluid) to lower the engine's emissions, Isuzu took the hard way. It relied only on the diesel particulate filter (DPF), and it changed the powerplant with a cleaner one but with a lower displacement.

From the outside, depending on the trim level, it featured a dark grille instead of a chromed one. The car still sported black, unpainted, wrapped-around bumpers both front and rear for the base trim level. The carmaker offered the double-cab in six specifications: Utility, Eiger, Yukon, Utah, Blade, and Arctic Trucks AT35. In the back, the 2015 D-Max featured restyled new taillights.

Inside, it was the same utility vehicle as before, with hard plastic on most areas. The carmaker built it with a specific user in mind: the one who would appreciate a rugged car more than an SUV-like one. There were two storage compartments in front of the passenger, one on top of the center stack and a fourth one in the center armrest. A new infotainment unit adorned the top of the center stack. Isuzu enlightened the dark interior colors with a few shiny trims on the center stack and the door panels. The carmaker offered good interior room for up to five passengers and, for the top trim level, it offered a choice for leather upholstery.

Under the hood, Isuzu installed a new Euro 6 compatible, 1.9-liter turbo-diesel engine. It provided 163 hp, and the carmaker paired it to a six-speed manual. 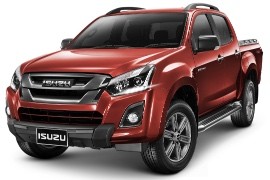