Built as a part of a common project between GM, Honda, and Isuzu, the Amigo was a badge-engineered model offered for the Japanese and the U.S. market.

It was the beginning of the SUV era when carmakers tried to offer off-road vehicles for the masses. But they still didn't figure out how to build them. The new SUV made by the three car-companies was a mix between an off-road vehicle and a regular car. It featured a front independent suspension for comfort but a transfer case with low-range gear for off-road tracks. It failed to do both. GM offered the car as Opel/Vauxhall Frontera in Europe with a diesel engine from Isuzu, a gasoline engine from GM, and another from Honda. Some parts of its drivetrain were carried-over from other pickups.

The Amigo was offered as a three-door vehicle, with the same rectangular headlights with rounded edges as Vauxhall or Opel. Isuzu installed a special plastic grid-pattern grille with its chromed name on it to distinguish it from its siblings. The C-pillar was leaned forward and formed a triangular-shaped small window behind the B-pillar. In the back, the car featured a removable hard-top or a canvas.

Inside, Amigo featured a narrow dashboard, with a curved fascia to look a little bit more stylish. The carmaker installed the HVAC controls up on the center stack, while the center console was occupied by the handbrake, the gear-stick, and the transfer box selector. It offered a decent room in the front but with limited legroom in the rear.

While Isuzu was well-known for its diesel engines, most of them were sold with the gasoline units provided by Honda or GM. In some markets, it was available with Isuzu's 2.2-liter turbodiesel. 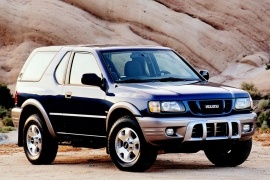