The second generation of the biggest Infiniti model on the market was the QX80.

Unveiled at the 2017 Dubai Motor Show in December, as a 2018 model year, the QX80 was based on the Nissan Armada pickup-truck chassis, which was used for the Nissan Patrol as well. It brought more technology inside, both for safety and for comfort. To ensure the manufacturing quality, the QX80 was produced in Nissan's factory in Yukuhashi, Japan. For the Russian market, the car was assembled from CKD kits in Saint-Petersburg.

The most important visible change of the exterior was on the front side of the car, where the curvy lines were changed with more modern, angular ones. It's new, LED, headlights followed the same design language as for other sedans, SUVs, and coupes from its family. The side air-vents from the front fenders were reshaped accordingly. The taillights were fitted with LED, similar to those found on the QX50 SUV.

The interior was fit for seven or eight passengers, depending on the configuration. An 8” infotainment screen was installed for the front passenger and the driver. For the rear-seat entertainment, the QX80 featured new displays with high-resolution screens, and 3.5mm jack for headphones. The side steps outside the car were enlarged, for easier ingress and egress. 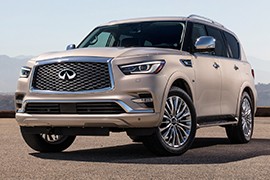