Infiniti introduced a facelifted version for the QX70 lineup in 2017, improving the SUV with a more aggressive look, and also offered a newly introduced Limited Package.

The premium SUV segment was highly competitive. All premium carmakers had something to offer here, and that led to a tight race between the brands involved. As one of the three Japanese premium brands, Infiniti couldn't stay aside and closed the gap between the QX70 and its competitors when it refreshed it four years after the model introduction.

At the front, the 2017 QX70 sported new, standard, bi-functional xenon headlights that flanked a redesigned grille with a chromed surrounding and black mesh. Under the bumper, a silver shield gave the impression of a true off-road vehicle, even though the QX70 was far from that. The vents installed on the front fenders featured a body-color trim on the sides, and most importantly, they were not fake. Instead, they were used to extract the air trapped inside the wheel wells, thus reducing the aerodynamic lift. Last but not least, the car received a set of 21" light alloy wheels.

Inside, the carmaker installed a 10-way power-adjustable driver's seat, with 8-way for the side passenger. Even though Infiniti claimed that the car could take five occupants inside in comfort, four was more feasible, while the trunk was designed to carry four golf bags.

The platform was kept, and the 3.7-liter VVEL powerplant was good for 325 horsepower. It was mated to a seven-speed automatic gearbox that sent the power to the rear axle or in all corners. 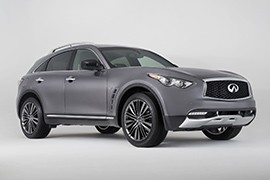