Infiniti broke its classic design language and entered into a new, uncharted map, with the 2022 QX60 revealed in June 2021.

Infiniti teased the second generation of the QX60 in February 2022, and its customers awaited to see the final product. However, the SUV still relied on the same Nissan D platform used for the Pathfinder, which means that it wasn't just showing and no go. Yet, the vehicle's look was far more critical for the Infiniti customers than the approach or departure angle.

At the front, the QX60 featured a new signature grille that suited the premium brand better than the previously used one. Its trapezoidal shape sported a rhomboidal mesh-grille with the brand's name engraved on the lower chromed slat. The LED headlights featured a three-part DRL mounted on their upper side, and their swept-back shape continued on the fenders. The carmaker installed tall and narrow scoops on the sides of the bumper, which created a more aggressive look for the seven-seat SUV. From its sides, the sculptured doors and rear quarter fenders were aerodynamically studied to lower the drag resistance, while at the back, the LED taillights mimicked the same shape as the headlights.

Inside, depending on the trim level, the carmaker added up to seven seats. For the top trim level, the Autograph, the QX60 featured captain seats in the middle row and a removable center console. All seats featured a zero-gravity design inspired by NASA, and the front seats were heated and ventilated. For the dashboard, the carmaker offered an option for a 12.3 touch-screen placed above the center stack. Like any other SUV from its class, the QX60 had to provide a good cargo area. With the third row folded, it offered 1,177 liters (41.6 cu-ft) of trunk space.

Under the hood, Infiniti placed its bets on a 3.5-liter V-6 engine paired with a nine-speed automatic transmission. In addition, the carmaker offered the QX60 with either front- or all-wheel-drive. 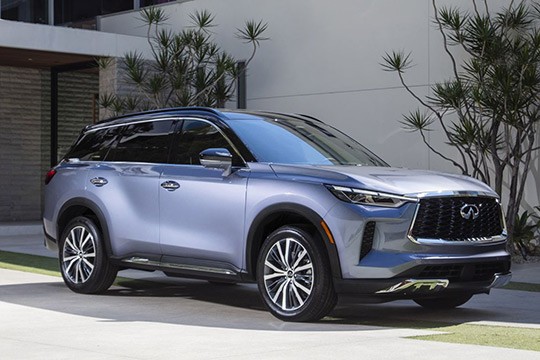