The battle for the big, seven-seat SUV segment was on, and Infiniti moved in 2013 with the QX60 range and upgraded it just three years later.

Infiniti needed a lighter seven-seat vehicle and chose the Murano platform to develop a new SUV on it. Its engineers increased the wheelbase and installed the third row of seats in the back. It was a bold move for the Japanese premium carmaker.

From the front, the QX60 showed its roots from the Infiniti brand with the specific design for the headlights. A broad mesh-grille completed their angry-looking shape with the chromed surrounding. The designers decided to add more chrome on the lower bumper area and on the sides. Its sculptured door panels featured a long, arched, ascending line toward the taillights.

Inside, the carmaker installed the same infotainment unit as the one from the rest of the Nissan range. Nissan believed that the 2-3-2 seating formula was a better choice than the 2-2-3 used by some of the American carmakers. Besides, it didn't offer enough shoulder room in the last row. It offered a 60/40 split-folding second row and a 50/50 third row of seats to increase the trunk size.

Under the hood, Infiniti chose the 3.5-liter VQ engine as its main powerplant, while a 2.5-liter hybrid was offered as an option. 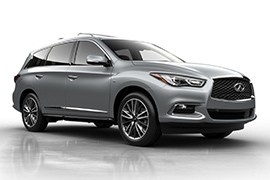 1 Infiniti Puts the Kibosh on the Q60