Infiniti introduced the second generation of the QX series in 2016, and, in August 2020, the model was updated for the 2021 model year.

While the first generation of the QX was more like a smaller brother of the big FX series, the second generation looked more like an alternative for the premium compact segment. Therefore, the crossover was improved in many areas regarding comfort and safety. The designers had to do some work as well.

From the outside, the double-arch grille made the car looks bigger than it was. The lack of any gap between the grille and the hood made a clear statement about the product quality. The QX50 featured the Infiniti's signature LED headlights design with daytime running lights on the headlamps' edge. A subtle gap at the back of the hood, on the upper side of the fenders, let the hot air escape from the sides of the car, enhancing the cooling and the aerodynamic.

Inside, there were more differences between the facelift and non-facelift versions. Apart from the base trim level, the Pure, all of the other versions featured panoramic glass-roof. The dashboard was asymmetric, with a focus on the driver. On the center stack, there were two touch-screen displays installed. Apple CarPlay and Android Auto integration were standard on the entire range. For the sound system, Bose equipment was offered as an option.

The engine was the first variable-compression turbocharged gasoline unit. It offered a compression ratio between 8:1 and 14:1 depending on driver needs for power or fuel-efficiency. 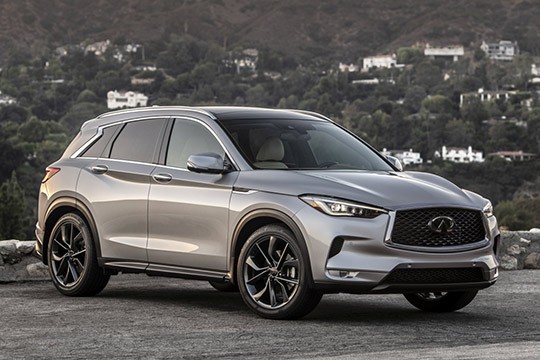