The Q40 was designed to replace the old G37 that was already dated for the time.

To enhance the experience, Infiniti offered the Navigation Plus package that added, of course, a navigation system, voice control, an upgraded 10-speaker premium audio system, traffic reporting and Bluetooth streaming audio. As a stand alone option, a sunroof was also available.

Compared to the rivals on the market, the Q40 was not available with much technology and features, keeping it pretty simple.

Safety wise, the Q40 featured antilock brakes, stability and traction control, front side airbags and side curtain airbags. A “Snow Mode” was available for the all-wheel-drive system and was designed to control the throttle response on slippery surfaces. 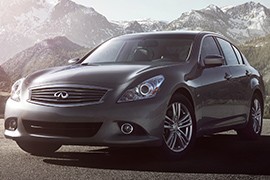