The fourth generation of the Hyundai iX35/Tucson was unveiled in mid-September 2020 and it showed no drop in the pace of the Korean car-maker.

With the introduction of the 2021 model, Tucson looked for inspiration elsewhere than the German car-makers. The design was completely different, and it showed some inspiration from the Toyota Rav4 and a touch of SUV-coupe styling.

With its flared fenders, both front and rear, and the sloped chromed line over the windows, the 2021 Tucson looked more like an SUV coupe than just a regular, compact-sized, cross-over vehicle. The huge grille in the front featured a 3-D design and headlights that showed like those found on some concept-cars. But it was a production model. The front bumper featured two wide scoops on the outer sides and a smaller grille on the bottom of the apron.

Inside, Hyundai struggled to offer more for its customers. The flat and low dashboard followed a minimalist design, with a grille-like line placed on its upper side. It was a unique design on the market. The two-dials on the instrument cluster and the big infotainment screen on the center stack showed an advanced look.
The front seats featured medium-sized bolsterings on the outside, while the split-folding rear bench was good for three adults.

The 2021 Tucson was introduced on the market with a turbocharged 1.6-liter gasoline engine, helped by a hybrid system. There was a basic, non-hybrid, version as well. It offered a wide range of manual or automatic traction and up to 7-speed automatic transmissions on the list. 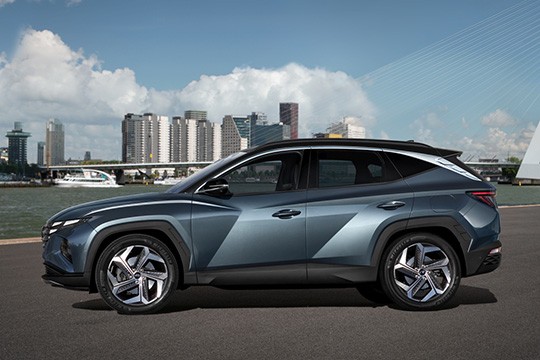