Hyundai introduced the second generation of the Santa Fe in 2005 in South Korea and, two years later, on foreign markets but by 2009, it had to update the SUV to comply with the Euro 5 emission standards.

The Korean carmaker had a tough time when it tried to enter the SUV segment. While the first Santa Fe generation was characterized mostly by being dull, the second generation grabbed more attention to it. There was a new design language and, also, the price was lower than many of its competitors.

Along with the facelift, the carmaker changed the front fascia and added sharper-looking headlights and a new bumper. A wider A-shaped lower grille flanked by foglights increased the overall aggressive look. Meanwhile, a thicker chromed slat adorned the upper side of the main grille, mounted between the headlights. But Hyundai didn't want to promote a rugged, off-road look. It aimed mostly at those looking for a family vehicle but were not satisfied with regular station wagons.

Inside, the 2009 Santa Fe featured new materials and an improved design. Yet, the seating position remained high and offered a safe sensation for the driver and other occupants. Thanks to that, there was plenty of room for five adult passengers. Even the center tunnel needed for the transmission was low enough and didn't represent an issue for the rear occupants.

Under the hood, the main powerplant for Europe was a 2.2-liter turbodiesel with Diesel Particulate Filter (Euro 5), while other countries had to rely on the 2.7-liter V6 gasoline unit. 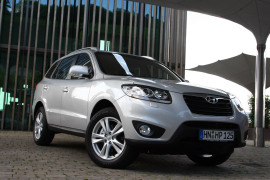