The Kona is one of Hyundai's biggest hits on the market, and that made the Korean carmaker try a different approach with an "N" version for it in 2021.

Hyundai was not reluctant to have high-power versions, and, before the internal combustion ban, it tried to get more attention to it with the N versions, which was its performance division that made possible the world rally cars and the race cars for track battles.

The Kona was introduced as a small-segment crossover, aimed directly at those who needed an affordable, city-oriented vehicle. While most of its initial powertrains were mostly oriented towards fuel efficiency, the N was just exactly the opposite: it was the fierce one.

Hyundai didn't hide the performance-oriented car with the same look shown on the rest of the Kona range. The front fascia featured the same body-colored bumper but with black grilles. Its side scoops sported a hexagonal mesh, unlike the rest of the Kona range that showed regular plastic panels and covers. At the bottom of the apron, the N version received a red stripe, emphasizing the car's sporty character. On the sides, through the big 19" light-alloy wheels, the red brake calipers warned the bystanders that it was not an ordinary vehicle. That message was repeated in an even more obvious way by the enlarged rear wing mounted on the tailgate.

Inside, the front seats featured a high-bolstered area on the sides and an embroidered N letter on the seatbacks. Even the rear seats received a special treatment and upholstery, with faux leather and Alcantara for the center sections.

Under the hood, the N worked its magic and provided the vehicle with a turbocharged 2.0-liter engine that provided 280 hp. It paired the turbocharged inline-four mill with an eight-speed automatic transmission (wet dual-clutch gearbox) that sent the power to the front wheels via an Electronically-controlled Limited Slip Differential (e-LSD). 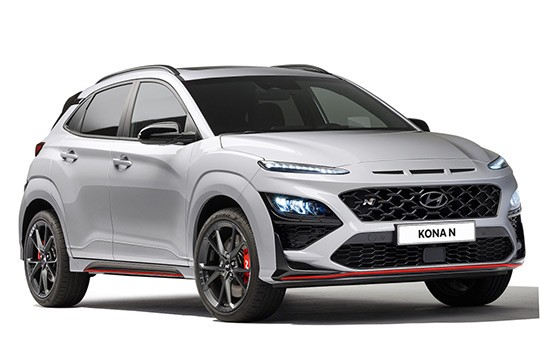