Hyundai kept its promise and introduced a mid-life cycle refresh to its Kona crossover in late 2020 for the 2021 model-year and brought more of a sophisticated design than a revamped drivetrain.

The Korean carmaker chose to name its vehicles after various U.S. locations such as Santa Fe, Tucson, or Kona. The latter was inspired by the western district of the Hawaii island. Sure, the Creta was named after an island from the Mediterranean sea, but that was the exception.

Hyundai's team introduced a few modifications to the car's look. Its daytime running lights were still mounted on top of the front fascia, like two light strips that pointed toward the grille. Unlike its electric-powered sibling, the version fitted with an internal combustion engine featured a black grille with a 3D mesh-grille. The design team considered that a silver shield would emphasize more the SUV style of the small crossover. They also installed LED headlights, which were a good addition to a 2021 vehicle.

Hyundai installed a completely digital instrument panel in front of the driver and an additional touchscreen display for the infotainment system placed on top of the center stack. On the other hand, the gear selector still looked like it was designed at least two decades before the car's introduction. The Korean carmaker improved the comfort of the rear seat's passengers by adding a pair of USB charging ports and raised all occupants' mood by introducing new ambient lighting.

Under the hood, Hyundai installed a choice of two engines: a turbocharged 1.6-liter for the N-Line version and a naturally aspirated 2.0-liter paired to a CVT. Both of them sent the power to the front wheels. 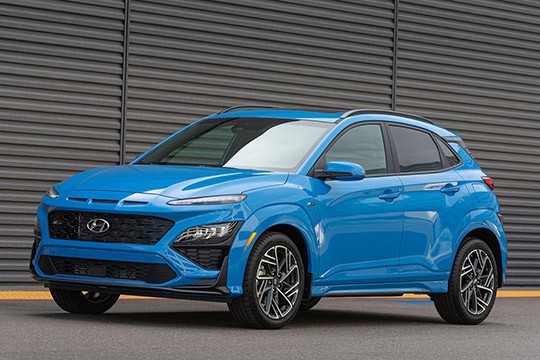