The 2016 Hyundai Ioniq was designed from the start to be delivered in three versions: hybrid, plug-in hybrid and full-electric.

By doing this, the car could have been equipped with batteries without altering the rest of the vehicle.

It was not a secret for anyone that Hyundai targeted the Toyota Prius when it launched the Ioniq. It took everything that people liked about Toyota and improved it in every way. It was the same recipe that Toyota used when it started to sell cars in the U.S. or Europe.

The wedged shape of the car, with a sloped rear and a long liftgate. The sloped rear end was similar to the Prius idea of a long tailgate that covered a large and accessible trunk. Under the trunk's floor, the Ioniq featured a space-saver spare wheel instead of a flat-tire repair kit.

On the inside, Hyundai managed to install an impressive list of features as standard, such as the leather steering wheel, autonomous emergency braking, and lane-keep assist. For the upper trim levels, there was available a heated steering wheel, heated and ventilated seats. The 7” infotainment unit included the navigation system and was compatible with Android Auto and Apple Car Play.

There were three powertrain options. There was a standard hybrid, a plug-in hybrid, and a fully electric version. The latter was not available for the Toyota Prius. 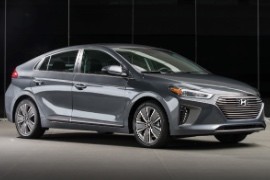 4 This Hyundai Santa Cruz Will Tackle the 2022 Rebelle Rally