The Elantra N-Line was launched in April 2020 just when the pandemic hit the world.

But the Koreans pushed forward with that jaw-dropping compact sedan that looked way more aggressive.

After Hyundai entered the World Rally Championship and started to be important on stages, the motorsport department was called and asked to give a helpful hand in developing of a sportier version for the i30 and soon after, for the Elantra Sedan N-Line.

The exterior look of the 2020 Elantra was different than its predecessor. Its angular face, with a deep black grille at the front and swept-back headlights, might not have been very original, but they were different than the rest of the Hyundai line-up. The A-pillars were very raked and the streamlined greenhouse resembled a four-door coupe vehicle. The back of the car was more of a fastback than a classic, three-box, sedan.

Inside, the Elantra N-line was offered with a choice for the instrument cluster with either analog dials or a completely digital panel. On the center stack, there was another display for the infotainment system, which allowed connectivity with a smartphone either via Apple CarPlay or Android Auto. An interesting feature was the “Drive Mode” knob placed at the same level as the steering on the outer side of the dashboard. It was easy to reach only for the driver. The two front seats were separated by two bars over the center console.

Under the hood, the Hyundai Elantra N Line featured a rather disappointing engine when compared to the car's look. It offered 210 hp from a 1.6-liter turbocharged unit with direct-injection. It was paired to a 6-speed manual transmission. On specific markets, it was available with a 7-speed dual-clutch automatic gearbox. 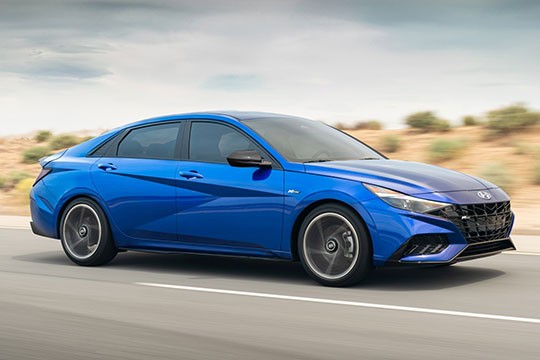