1 2023 Hyundai Kona Aims Big With Safety Tech and a Roomy Interior, but With Old Powertrains

2 2023 Hyundai Tucson Becomes Smarter and Pricier Down Under

4 Hyundai Motorsport Has Big Plans for the 2023 WRC Season

5 Hyundai Ioniq 5 Gets e-Corner Modules, Can Crab Walk Like a Boss

After the bad reviews about the 1998 Atos, Hyundai reacted quickly and put its engineers to work around the clock and give the vehicle a better look and more power under the hood.

Usually, automakers need several years for every facelift or upgrade made to their cars. Fortunately, Hyundai only needed one, but the results were not spectacular either. Fortunately, these were good enough to keep the small Atos MPV on the market for four years until a proper facelift was introduced.

With a design that showed nothing but a tall vehicle with a small-size hatchback front, the Atos Spirit tried to be a practical vehicle. Compared to its predecessor, it showed new headlights that fit better to the front end but not to the entire car. Since the overall bodywork couldn't be significantly improved, the A-pillars remained the same. But still, the C-pillars were changed, and they were slightly tilted forward. In addition, the taillights were moved lower, improving the vehicle's design from the back.

Inside, there were some changes in terms of materials used. Fortunately, it was roomy enough for four passengers but not exactly good for five. At the front, the dashboard looked the same. Even the digital clock with its cluster tilted toward the driver was the same. The AC was nonexistent for the base trim level, but that was available for higher grades.

Under the hood, the tiny one-liter engine was pumped up to produce four more horses than its predecessor. In addition, Hyundai offered the Atos Prime with an option for a four-speed automatic. 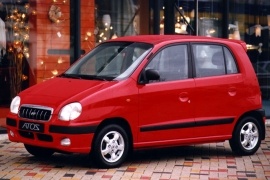