The increased demand for leisure sport-utility vehicles and pickups made the Hummer offer such a shape for its Hummer H2 in 2004; the Sport-Utility Truck.

Hummer was more than a rugged off-road vehicle. It became a trendsetter after Arnold Schwarzenegger showed-up with an H1 model. Soon, the car became demanded on all the markets. But while the H1 was rugged and tough but too wide to be a daily driver, Hummer came-up with a smaller version: the H2. But that was not enough for its customers who asked for a utility vehicle. And that's how the Hummer pickup came on the market.

It was big, bulky, and with more flat surfaces than a cabinet. But the customers didn't care about the design. They didn't care if the car looked like a brick with a bed behind it. The orders started to pile up. General Motors was happy about it, mainly since it used the same platform as the Chevrolet Silverado and the Cadillac Escalade. The small, round headlights and the chromed grille with vertical slats were a true statement against Jeep.

Despite its big exterior size, the H2 SUT barely offered room for five inside. Even the bench in the back was profiled for two and a little place for a middle seat. In the front, the car featured wide seats with thick bottoms. The carmaker installed a squared instrument cluster with two large dials and four other gauges in front of the driver. The most unusual feature was the gear-selector handle, which was L-shaped and resembled a helicopter gas-throttle.

Under the hood, GM placed a 6.0-liter V8 engine, carried over from the Silverado. There was only one transmission available: a 4-speed automatic. 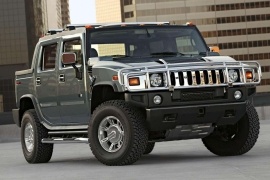 5 Ashton Kutcher and Mila Kunis Bought the 2022 Hummer EV, He Has the Shirt to Prove It