Designed for the U.S. Army, the Hummer H1 became famous after the 1991 war between U.S. and Iraq, where the big SUVs proved their capabilities in battles.

After more and more customers started to search in the Army Supply database for Hummer H1 vehicles, the carmaker decided to introduce it on the market. It was not as rough as the U.S. Army version, but it was close enough. Worth mentioning that it was not a new model since AM General built it since the '80s.

The H1 Wagon shared most of its components with the 4-door pickup version. At the front, it offered the same squared, wide area with two round headlights and a six-slat grille. Its bumper sat high enough to be seen in the rearview mirror of a compact hatchback. The extended roof over the rear passengers and the cargo area made the car look like a shed on wheels from its sides. Its last row of side windows featured a slide-open system. In the back, the carmaker installed side-hinged doors (fridge doors) instead of a tailgate.

Inside, it was more comfortable than its army sibling. The driving post was surrounded by a massive part of the dashboard, where the stereo and the AC-controls were installed. Like its four-door pickup sibling, it offered room for four adults in the first row of seats, but AM General offered an option for an additional bench in the back, facing rearward. That was the solution to carry six people on a bus-sized vehicle.

The only available engine was a V8 diesel unit paired with a 4-speed automatic transmission. The all-wheel-drive system was the best part of the car. It featured portal axles on independent suspension. Moreover, the driver could increase or decrease the tire pressure from the driving post. 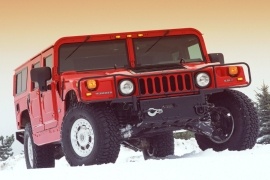