AMC General Hummer H1 became notorious after the 1991 Iraq war, and the U.S. customers asked for a civilian version. The carmaker answered with a few options, including an open-top four-door version.

While all the credits went to the four-door hard-top version, there were other few H1 versions. Thanks to its body-on-frame construction, the carmaker had no trouble making an open-top four-door vehicle, which increased the fun-factor. The car was able to drive to the surfing area with the board sticking out from the cabin through the open top.

First of all, the car was immense. It was the widest vehicle on the market, and the driver needed to know how to deal with that. It looked like a brick with round headlights and a slightly sloped hood to the window lines. The 4-door Opentop pickup version featured a bed in the back big enough good to carry your camping gear and a pair of gloves. Its huge wheels were able to go everywhere unless it was muddy.

Inside the big cabin, there was room for four adults, including the driver. A massive center tunnel practically separated the occupants, and it was virtually impossible to cross the vehicle from left to right when the canvas-top was on. The driving post was surrounded by a massive part of the dashboard, where the stereo and the AC-controls were installed.

The only available engine was a V8 diesel unit paired with a 4-speed automatic transmission. The all-wheel-drive system was the best part of the car. It featured portal axles on independent suspension. Moreover, the driver could increase or decrease the tire pressure from the driving post. 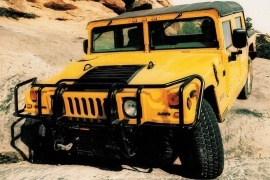