After Hummer decided to sell its monster vehicle in a civilian version, it offered the truck a few body versions.

One of the least known was the 2-door hardtop pickup.

The Hummer was the official supplier for the U.S. Army since the mid-'80s, and some private customers paid hard money to get one of those from the Army Supply. Hummer suddenly understood that there was a market opportunity and took its chance. At first, it tried to sell the 4-door Hummer H1 to the market, and it was a success. Big names such as Arnold Schwarzenegger bought that big, off-road vehicle, halfway between a 4x4 and a semi-truck.

It was true that the Americans are the biggest pickup buyers in the world. After all, the F150 was not a limousine, isn't it? So, why the Hummer H1 couldn't be offered as a pickup? It was, but its success was limited. The huge vehicle was able to carry two occupants, and the bed was not that big due to the transmission components. On top of that, due to regulations, it was not allowed to tow big trailers, fit for its power.

The interior was fit for two occupants, separated by the wide center tunnel where the engine and gearbox were fitted. The dashboard was carried over from the 4-door version, with an almost vertical position and a massive center stack. At least it was fitted with an air-conditioning and a sound system, which was installed on a panel tilted toward the driver. The leather seats were included, but the power windows were not.

AM General fitted the Hummer H1 with the same drivetrain as the rest of the range. Its big, V8 diesel engine was able to easily pull a trailer but with a very bad fuel-efficiency. 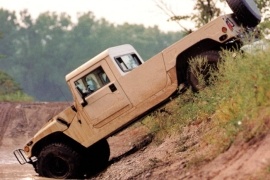