The Japanese car manufacturer tried to sell a little MPV into the small vehicle segment and, despite all the odds, it did.

And it was successful not only in Europe. The third generation of the Jazz/Fit was proof.

Even if some people are considering the Jazz as a hatch-back, it is more of a minivan in the sub-compact segment. There were more car manufacturers that tried the recipe in Europe and didn't have any luck. But the little Jazz did.

For the third generation, introduced on the Japanese market in 2013 and a year later was launched at the 2014 North American International Auto Show as a 2015 model. The design was around the spaceframe used for the unibody construction. Since it used high-strength stell-alloys, it allowed the manufacturer to built the car even smaller than before, despite the “expand the car” trend of the market. The new headlights were in the same theme design with the Civic and the HR-V model. The ascending sideline was ended into connection with the rear, high-mounted taillights.

Inside, the cabin was very spacious for its class. The flat platform with torsion beam suspension on the rear allowed a special multi-configuration interior system that allowed the rear seats to be either folded or raised.

Under the hood, there were more engine options available, depending on the market. The base unit was a 1.3-liter, while the top-spec was a hybrid version equipped with a 1.5-liter Atkinson engine plus an electric motor. 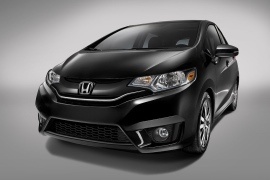 1 Fake It Till You Make It: Say Hello to the Honda Accord 'Hellcat'

2 Another Carmaker Confirms the Struggle: The Demand Exists But Not Enough Chips