5 Edgy Honda S2000 Roadster Comes Back From the Dead, Albeit Only Virtually

Honda described the HR-V as a High Recreational Vehicle. It was a crossover that saw the market in 1998, and in 2001 it received a 5-door version.

The crossover market was not invented yet in 1998 when Honda introduced the HR-V. But the Japanese carmaker took a small vehicle platform, extended its wheelbase, placed a different body on top of it, and the new HR-V. Its success was instant due to its low running costs, high seating position, and the 4x4 option. But the new model lacked a practicality factor: the rear doors. So, Honda fixed that later on. In 2001, the carmaker introduced a facelift for the entire range, and it lost the 3-door version.

Honda designers imagined an interesting shape for the headlights, with a twin semi-circular shape at the bottom, that cut their way through the top of the bumper. There was a small opening between them to coo the engine, but the bigger grille was on, the lower part of the bumper. For the greenhouse, Honda tried a mix between a station wagon and a hatchback. With the raked windshield and the flat, vertical tailgate, the result was good and formed a spacious interior. At the back, the vertically mounted taillights resembled those installed on Honda CR-V.

Inside, the car's vertical sides and the thin doors left enough room for five adult passengers, but most versions were offered as a four-seater, and there were only two seat-belts in the back. The folding and tilting rear bench allowed an increase for the trunk area.

Under the hood, Honda offered the HR-V with a choice of two engines. Both of them were of 1.6-liter displacement but provided different output power. The Japanese crossover featured either a front-wheel-drive or an all-wheel-drive system. 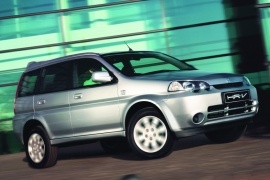