In 2018, Honda introduced a facelift for the HR-V crossover.

But it was more than just new headlights and bumpers. It introduced the AWD as well.

The first generation of the HR-V was unveiled in 1999, and its initials came from Hybrid Recreational Vehicle. It was not about a hybrid power, but it was a hybrid between a car and an SUV. At that time, the crossover name didn't exist on the market. While the first generation was 3- and 5-door vehicles with AWD system, the second generation featured only 5-doors and front-wheel-drive. In 2018, that was changed.

While it kept the same shape as before, the 2019 Honda HR-V offered a new front fascia with the wing-design on the grille, which was extended to the headlights. The bumpers and the taillights were modified as well. For the Sport trim level, Honda installed new, 18", light-alloy wheels.

The interior was changed with the introduction of a new instrument cluster for the driver. It featured a centrally mounted speedometer, a digital tachometer on the left, and a 4.2" TFT display on the cluster's right side. The infotainment unit was changed, and it was Apple CarPlay and Android Auto compatible, which worked together with the on-board computer.

The most significant improvement was on the drivetrain. Honda installed a 1.8-liter engine under the hood. It mated it to a CVT transmission and could send the torque to the all four or only to the front wheels. 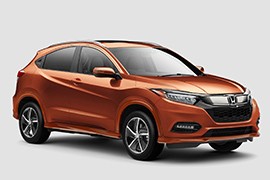