Honda's first ever fully electric car to be sold in Europe was initially unveiled in the form of a rather cute and well-received concept car at the 2017 Frankfurt Motor Show.

Two years later, at the same car show, the production version of the Honda e has been launched with two extra doors and the same cameras instead of exterior rear view mirrors as the concept.

The e is rear-wheel-drive, just like the BMW i3, and the electric motor's output varies between 136 ps and 154 ps, depending on the version, and 315 Nm of torque. The 0 to 100 kph (62 mph) acceleration time of 8.0 seconds makes it among the quickest accelerating model in its segment. The 35.5 kWh battery is tiny in volume but Honda says it will deliver a range of up to 220 kilometers from a single charge. Thanks to a fast-charging capability, the Honda e can recharge to 80% capacity in about half an hour. Equipped as standard with connected services and apps accessed via the integrated touchscreen interface, the model also comes with the Honda Personal Assistant, which Honda says that it's a smart artificial intelligence (AI) facility that uses contextual understanding to create natural conversations with the occupants. 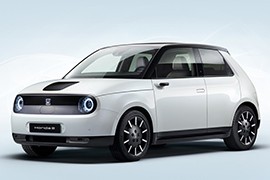