For over 20 years, the Honda CR-V has been the best-selling crossover in the United States, which is why Honda has decided to gift its fifth generation an extensive mid-cycle facelift for the 2020 model year.

Joining the Accord Hybrid and the Inside as the third electrified Honda produced on American soil, the CR-V Hybrid is also the first electrified Honda SUV in its U.S. lineup. Of course, a new hybrid version isn't the only news surrounding the facelifted model.

Alongside the new two-motor hybrid electric version there is also a 1.5-liter turbocharged four-cylinder with VTEC technology available on all trim levels. The front and rear styling have received major upgrades as well, while the Honda Sensing active safety system has been made standard on all versions. On the front, the large openings for the fog lights are now integrated in the bumper, while the chrome grille is even more pronounced, making for a more aggressive look. The rear now features new dark-tinted taillights and a new dark chrome treatment for the garnish below the rear glass, while the bumper has been redesigned as well. 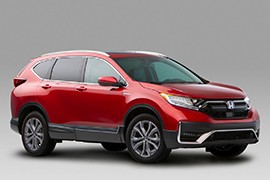 5 3-Door Honda Civic Type R Sounds Like the Acura Brother We Want, but Cannot Have