In 2012, Honda launched a more fuel-efficient vehicle for the American market.

It was called the Civic HF and was harking back to a special edition of the Honda CRX from the 90s, which was also called HF and was really frugal regarding fuel consumption.

On the outside, there were few things which differentiated the HF Civic compared to the other normal versions. It featured smaller, 15” alloy-wheels with low resistance tires. Additional underbody panels were fitted to decrease the model's wind-resistance. The last touch to improve economy was a decklid spoiler that reduced the turbulences behind the car, improving aerodynamics.

At that time, Honda had few gasoline engines in its lineup, but chose to install the 1.8-liter unit, which was calibrated for fuel-efficiency. The 142 hp engine was mated to an automatic 5-speed gearbox. The final result was a decrease in the fuel consumption and the HF could do 41 mpg (5.7 l/100 km) instead of 37 mpg (6.3 l/100 km) as the other versions.

As any Honda, though, the vehicle was sporty enough to be sought after by younger customers. Its four-wheel independent suspension was a good reward for its sportier drivers. In 2012, when the worldwide economy had started to get back in shape, the demand for fleet vehicles grew and the HF version was fit for the job, until the Civic CNG showed up and took its sibling's customers. 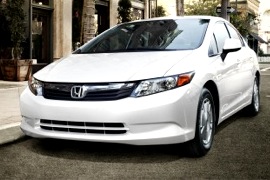