The Honda Civic is known for its rev-happy engines and for its performance in the hot hatch segment.

But also, let's not forget about its eco-friendly models. From the first Honda Insight to the hybrid versions nowadays, the Japanese carmaker tried to built engines for everyone. The CNG version is one of those, available already in most of the united states. With this in mind, Honda Civic Civic Natural Gas continues as the only mass-produced natural gas sedan available in the U.S. at the time of its launch in 2013.

Under the hood, the engineers installed the 1.8-liter unit with 110 hp. Its power may not be exhilarating, but its fuel-efficiency is. With its EPA fuel economy rating of 27/38/31 mpg (city/hwy/combined) it is a very useful vehicle for someone who needs both range and a low cost fuel choice.

The 2013 Civic Sedan has a new front end and some new technical enhancements, which will make the car more planted on the road and more pleasant to drive. The rear suspension has been enhanced with a thicker stabilizer bar and new bushings. Thus, the firm suspension, for which the Civic is known, was softened and it is easier to live with it on a day-to-day commute. 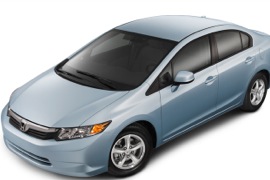