Honda introduced the ninth generation of the Civic, also in sedan shape, and it was that kind of vehicle that didn't show the owner's social status.

The Japanese carmaker raised the stakes with the Civic's ninth generation, which was no longer just another box-on-wheels commuter car. It proved to be a successful recipe that offered more for less. The Civic reputation grew not on its high-performance SI models as much as on the car's reliability, and the ninth generation added family-oriented features in the vehicle.

With its sharp-looking front fascia and swept-back angular headlights, the Civic Sedan looked more like a sports sedan than a regular compact-segment three-box vehicle. Its raked windshield, low greenhouse, and sloped rear windscreen resembled a coupe shape. The tall trunk lid looked rather bland in the back due to the big metallic area since the carmaker installed the taillights only on the quarter panels.

Inside, Honda installed a futuristic-looking dashboard with a split instrument panel. While the tachometer was in front of the steering wheel, the Civic showed the speedometer and other relevant info on a separate panel upper on the dashboard. Its center stack featured the infotainment unit above the climate control panel. Despite the sporty-looking exterior, the seats wore little bolstering. The bench provided good room for two adults in the back, with less legroom for the center passenger.

Under the hood, Honda installed its trustworthy 1.8-liter VTEC gasoline engine and paired it with a six-speed manual or a five-speed automatic. 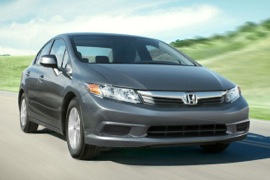