The eighth generation of the Honda Civic sedan was sold all over the world.

But even if it had the same name with the Civic hatchback, it had very few things in common.

Usually, when a car-manufacturer builds a hatchback and wants to do a station-wagon and a sedan version, just chop the back or add some body panels. But Honda did it differently.

The sedan was built in Turkey with the gasoline engine, in Japan with the hybrid engine and it didn't have a diesel version. Moreover, the look of the vehicle didn't have anything in common with the hatchback. The bigger headlights and taillights were something special for the model.

Inside, specific seats, with the gasoline tank installed under the rear seats made room for a lower driving position. The instrument cluster was futuristic, with a split display system. On the upper part was the speedometer and on a lower part other non-essential for driving info such as the trip-meter or check-lights.

For the suspension, the 2006 Civic Sedan had an all-wheel independent suspension with a McPherson up front and a multi-link system in the rear, unlike the torsion beam for the Hatchback. As a bonus, in Japan, a Type R sedan was available, with a 2.0-liter naturally aspirated engine that, in some special editions, boasted up to 220 hp. 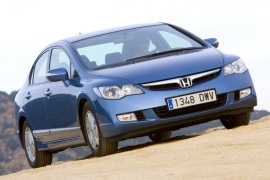