Honda introduced a facelifted version for its Civic Sedan in 2003 and offered it more safety systems than before.

On top of that, it provided it with a hybrid drivetrain.

While the Civic hatchback and coupe took most of the media attention, the sedan stole the buyers' hearts that tried to get one. It was already a well-known vehicle for its simple yet functional design and, moreover, for its impressive reliability. It was a "just add gas" vehicle. But it was more than that.

It can't be said that it was a work of art. It rather looked plain, if not dull, with its angular headlights and its single-slat grille at the front. The profile looked like the car would struggle to get to 60 mph (97 kph) harder than any other competitor. Yet, the car was the proof to not judge a book by its cover. Or a car by its shape, whatever works.

Inside, the simple style continued with a flat, low-mounted dashboard. Its center stack was straightforward with the controls for the AC-unit (if fitted) and the stereo. The instrument cluster showed nothing new than the rest of the Civic, with a four-dial layout. Honda installed very low seats for the compact-sedan segment, and the driver had its heels about the same height as the bottom.

But Honda was surprising on other sections. For instance, it featured independent suspension in all corners and a lively 1.7-liter engine under the hood paired to a 5-speed manual. A four-speed automatic was on the options list. The biggest surprise was the 1.3-liter Hybrid version that offered an excellent 39 mpg (6 l/100 km) in the city and 54.7 mpg on the highway (4.2 l/100 km). 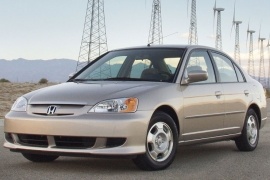