Honda unveiled the seventh generation of the Civic in 2000, and it was available in a few body shapes, and they didn't share too many body panels between them even though they were built on the same platform.

Some people considered that it was a step back for the Japanese carmakers since it simplified the front suspension, which was considered too complicated for a simple, family sedan. The carmaker switched from multi-link to McPherson, which offered an efficient solution for a car of that size. Fortunately, it kept the rear independent suspension, which provided better comfort, especially for the rear seat passengers.

From the outside, the three-box version featured a more aerodynamic stance with streamlined headlights and corner-mounted turn-signals incorporated into the main lamps. Its height was lower than the hatchback versions and just a little bit higher than the coupe. In the back, the taillights were split between the rear quarter panels and the trunk lid, which was unique among its siblings.

Due to its wheelbase, it offered enough legroom for the rear seat passengers, bigger than in the hatchback versions. Unlike the hatchbacks, it featured a floor-mounted gear-stick and a center stack extended to the center console.

Under the hood, the sedan was offered exclusively with gasoline engines ranged between 90 hp and 131 hp, depending on the market. A hybrid version became available in 2002. 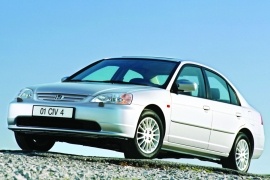