One of the best-known models from Honda entered the market in 1995 with increased dimensions over its predecessor.

After 23 years since the first Civic, the sixth generation was the last that belonged in the subcompact segment. It was available with four body versions, and the only version sold worldwide was the 4-door sedan. It featured advanced technical solutions for its times and remained one of the most appreciated generations in the Civic history.

Despite sharing a similar design trend as its predecessor, the 1995 Civic was longer and taller, but not wider. At the front, the headlights were covered with clear lenses. A center grille with a chromed badge in the middle and a chromed bar on top was characteristic for the sedan version. In the lower bumper, the Japanese designers installed a wider and taller air intake to cool the engine and the AC compressor. The rear taillights featured lower mounted reversing lights before the 1998 facelift, which were moved on the upper side after that.

The interior was still simple, with a black dashboard and cloth seats. Its classic instrument cluster, with white-on-black lettering, provided easy to read and understand gauges. A half center stack was installed in the middle and filled with the radio and the HVAC controls. Depending on the trim level, the car featured cranked or power-windows, plus a sunroof. Due to the unusually long wheelbase for its class, it offered decent legroom for the rear passengers.

Under the hood, Honda installed a wide range of gasoline engines ranged between 90 hp and 160 hp. All versions were paired to a 5-speed manual gearbox. For specific markets, a 4-speed automatic was available as an option. 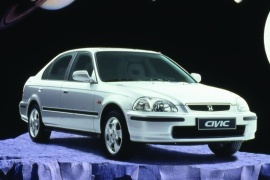