Honda considered that the compact-segment buyers deserved more attention and offered superior technologies in a market where the main criteria were the price.

There was no other carmaker to offer an all-wheel independent suspension in the segment. Moreover, it offered a complex system that was not available even for medium-sized vehicles. As a result, it won the comfort battle against all of its main competitors, and the customers started to rethink their budgets. Soon, the fourth generation of the Civic started to gain customers' hearts.

At a glance, it looked just like its predecessor, but it was a completely different car. It kept the same narrow, rectangular horizontal headlights and a small grille on the lower part of the bumper. In the rear, depending on the trim level, Honda offered a red trim that covered the area between the taillights.

Inside, the dash looked like a bolted together puzzle rather than a single unit. The carmaker installed the radio under the ventilation system, not above like most of the other carmakers on the center stack. Its straight lines design and low height gave a cramped vehicle the impression despite its four doors bodywork. But since its wheelbase was longer than on its predecessor, there was room enough for five adults on a short trip. For a family of four, with two children, it was an excellent car. Moreover, the standard folding seatback extended the luggage compartment.

Under the hood, Honda installed fuel-injected engines only, and that was a relief for most of its customers. All versions were paired with 5-speed manual transmissions. 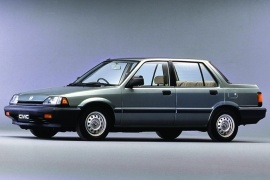