The tenth generation of the Accord left the European customer in tears since it wasn’t available there.

Honda built it specifically for the U.S. market and, since it was not constrained to have the same platform as its Old Continent sibling, it could make it larger.

While other carmakers started to increase their engine sizes to provide more power and refinement, the Japanese carmaker changed its register. The 2017 Accord was available only with four-cylinder engines and as a hybrid.

Its exterior design matched the carmaker’s new design language, with a deep black grille at the front and narrow, sharp, swept-back headlights. Its look was closer to the Civic sedan in terms of proportions but different in terms of size. The greenhouse featured a sloped C-pillar with a long rear windscreen and a short trunk lid. Depending on the trim level and options, the carmaker added a lips spoiler at the back.

The car’s interior revealed a high-tech approach, with buttons for the gearbox instead of the regular lever. On top of the center stack, Honda placed a floating screen for the infotainment unit. Its wide, comfortable seats provided adequate side support, while the long wheelbase offered plenty of legroom for the rear passengers. 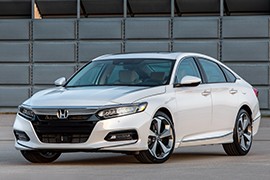