The Holden Trax is the Australian market version of the small crossover marketed by Chevrolet all over the world under the same name.

With the exception of small changes like a different grille, the Holden is pretty much the same as Chevy model and is basically also the same as the Opel/Vauxhall Mokka and the Buick Escape sold in America. However, the Australian model only has one engine choice, a naturally aspirated 1.8-liter four-cylinder sold with either a manual or on higher spec cars an automatic. Standard features of the Holden Trax include 16-inch alloy wheels, reverse parking sensors and rear-view camera. 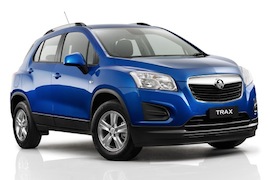