Underneath the panels of this vehicle were a 1956 Morris Oxford platform and a ladder-chassis.

Anything else came from your local hardware store.

There was a time when problems needed simple, quick solutions. India was in desperate need of vehicles that could cope with damaged or non-existent roads. The Hindustan carmaker decided to offer a quick fix for that. It took a platform, reinforced the chassis, and made a rear-wheel-drive vehicle powered by a simple, naturally aspirated, Isuzu diesel engine that provided great fuel efficiency.

If someone asked a five-year-old child to draw an off-road car, he would make a Hindustan Trekker. The vehicle featured completely flat everything: side panels, hood, and fenders. The front fenders were shorter than the engine's height, so the hood was like a lid with a rim around it. Strangely, the design team considered making a slightly raked windshield. It is incredible how much they could do in their launch break!

Inside, the carmaker offered the vehicle a few options for seating positions. It was with two seats at the front, and a bench in the rear, or two chairs in the front and two benches mounted longitudinally behind them. The later version was good to transport as many people as it could fit inside. There was a dash panel too, which looked like a plank with the dials fitted inside.

Under the hood of the 5-years old child dream car, Hindustan installed a choice of two diesel engines built by Isuzu. Despite the "off-road" look, the Trekker was rear-wheel-drive only, and it also bared the name Pushpak. A sweet irony was the fact that the passengers had to step down and push the car when going uphill. 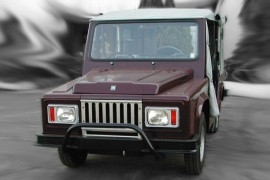 3 Kelly Brook Poses Next to a Hindustan Ambassador: Sexy and Funny

4 Hindustan Ambassador, First Car Made in India, Goes Out of Production