Spania GTA company has decided to build a Spanish supercar after 15 years of experience in various leagues with Spania Gta competicion.

Their first product was the 2012 GTA Spano.

The car impressed with its look. There were two large air-scoops on the front bumper. The sculpted side of the vehicle showed additional intake air vents for the mid-placed engine. And it was a big, Dodge Viper V10 engine stuck under the rear hood. The bodywork was built entirely with carbon fiber, titanium, and Kevlar.

For the interior, the GTA Spano featured bucket-seats covered in Alcantara. The main interior colors were dominated by the carbon-fiber grey and gold on the center console. The yellow rings around the dials from the instrument cluster completed the look.

Under the hood, the Geneva model featured a new engine, also taken from the Dodge Viper, but upgraded at 900 hp due to a supercharger and it was mated to a 7-speed dual-clutch gearbox. 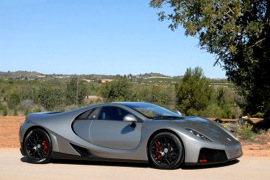 1 Spania GTA Brought Out Its Updated Supercar in Geneva: the New GTA Spano