GMC introduced a new SUV in its lineup in 2009 as a 2010 model based on the same Theta platform as the Chevrolet Equinox and the luxurious Cadillac SRX.

Despite the world's financial crisis and the difficulties met by GM in Europe, the carmaker didn't want to give up on its hopes of ruling the SUV segment. The Terrain was a family-oriented vehicle with room for five, an angular design, and fuel-efficient engines.

GMC offered the Terrain a bold design with a chromed surrounding for the grille and squared corner-mounted headlights. On the lower sides of the bumper, the crossover SUVsported vertical lamps, creating the image of an even taller vehicle than it actually was. On the sides, the wheel arches were widened in angular shapes, emphasizing the off-road abilities. But it was more show than go since it wasn't really prepared to tackle trails and uncharted maps through the forest.

Inside, the silver-look of the interior trims looked impressive, but they were actually made from plastic. On the center stack, GM installed its newest infotainment unit with a seven-inch touch-screen placed on top. The On-Star and XM Radio were standard on the entire range.

Under the hood, GM opted for a 2.4-liter inline-four for the base model and a 3.0-liter V6 for those who didn't really care about the hiking price of the gas. Moreover, to provide lower fuel consumption figures, GM offered the Terrain with a front or an all-wheel-drive system. 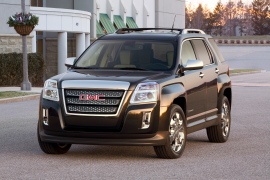 3 The Mighty GMC Hummer EV Is Fully Booked, No More Reservations Are Accepted

4 The GMC Hummer EV Is Leaking Water Through the Roof, It's Like a Colander