GMC introduced the third generation of the Sierra in 2006 and, a year later, it introduced the regular-cab option, which was not aimed only for workers.

With over a century of experience on the market, GMC Trucks already knew what its customers want from their pickup-trucks. Even though it couldn't beat the Ford in the sales figures, that didn't mean that there was something wrong with the way the vehicle was built. It was more like the way the vehicle was priced. The T900 platform offered better solutions and more powerful engines than its predecessor, the T800.

Like its predecessor, the Sierra was available in a few body versions, starting with a chassis-cab and going up to the big crew-cab version. Its raked windshield at 57 degrees decreased the aerodynamic resistance, increasing the fuel-efficiency and reduced the wind-noise. To add a more dynamic appearance, the Sierra featured flared wheel-arches. For the Regular Cab version, it featured a pair of doors at the front and a bed in the back available in three sizes: 5.75' (1752 mm), 6.5' (1981 mm), and 8' (2438 mm) on three different wheelbases.

Inside, the GMC Sierra offered room for two passengers. Like most of the pickup-trucks on the market, it offered a big dashboard, with a steering-column mounted gear-selector for the automatic transmission. Depending on the trim-level, the Sierra Regular-Cab could feature a sat-nav system, a leather-wrapped interior, and wood trim on the dash and door panels. 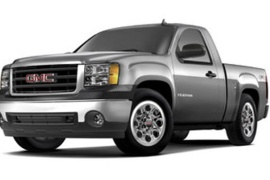