Despite the general trend to increase the car's dimensions, the 2017 GMC Acadia decreased its dimensions when compared with its predecessor.

But that didn't make it a small SUV.

The 2017 Acadia left the older chassis-based platform and adopted the C1XX platform that was also used for the Chevrolet Blazer or the Cadillac XT5. But despite its size reduction, it kept the three-row seating.

On the outside, the blindingly shiny, chromed-plastic grille might be too much for the front fascia. It looks like the design team ran out of ideas and used all the chromed parts they had in stock. The HID headlights were available only for the top version, but the lesser version had halogen-projector lamps. Looks like the GMC didn't discover the LED lights for SUV vehicles, or that the Acadia wasn't important enough for the market.

Inside, woodgrain imitation and aluminum plastic were all over the place, imitating a luxurious cabin. The man-made leather seats (or ecological leather as it was known) were part of the complete image of an outdated design launched a decade too late. But the 8" touch-screen for the infotainment system was placed in the proper place, on top of the center console. It featured Android Auto and Apple CarPlay.

For the drivetrain, the Acadia was available with an inline-4 engine or a V6 mated to a standard 6-speed automatic gearbox. It was available as an RWD or AWD. 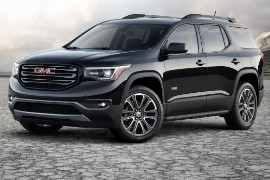