GMC Introduced the Acadia in 2006 as a 2007 model, and it was the company's first-ever passenger vehicle that featured a front-wheel-drive, even though it was dressed as an SUV.

When GMC launched the vehicle, there were no signs of the world financial crisis that was about to begin and throw the entire motoring industry into chaos, with the Big-Three from Detroit trying to dodge the financial losses bullets. Strangely though, the Acadia was fit for the forthcoming times and offered a lower-priced SUV in a market that begged for that kind of vehicle. Its unit-body construction made the vehicle lighter than the regular 4x4 vehicles on the market. That led to lower fuel consumption as well.

From the outside, the Acadia looked like a regular, classic-looking 4x4, but its softened edges made it appealing to the customers that didn't look for a rugged off-road vehicle. At the front, GMC installed a chrome-plated bar on top of the grille and boomerang-shaped headlights with corner-mounted turn signals. Its long rear windows and the raked-forward tailgate tried to diminish the car's off-road look. Its taillights featured clear lenses on their upper side.

Inside, the seven-seat vehicle was suitable for a family, or two, who wanted to go on long trips. Even with all the seats up, the Acadia still had a decent trunk. With the second and third rows folded down, it provided a long flat area and an astonishing 3,313 liters (117 cu-ft) of space. That was already in LCV territory.

Under the hood, GMC installed a 3.8-liter V-6 engine offered in two power versions: 275 hp (up to 2008) and then increased to 288 hp. Both versions were paired to a six-speed automatic version. GMC offered the Acadia with a front- or all-wheel-drive system. 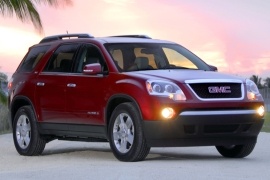