Just one year before the communist regime was thrown away by the people, FSO introduced a new evolution for its already old Polonez range and named it Prima.

Developed on the old Fiat platform, the 1988 model was updated to keep pace with the competition. FSO was exported in Western Europe and in the U.K., and it faced stiff competition from the French, German, British, and Italian carmakers. Its low price was no longer a good enough reason to buy one, so the Polish company had to adapt.

The interior featured a similar design as its predecessor, the regular Polonez model range. Due to its tilting steering column and the large interior, it was easy for a driver to find a good position. There was plenty of room in the back for two passengers, but the middle one had to sit on the transmission tunnel. A folding rear seatback was available to increase the trunk size.

Despite being offered a standard three-year warranty and a decent engine, the FSO Prime was not as successful as the carmaker needed to keep the production lines running smoothly. A 1.5-liter engine was the only choice that was offered on all markets, while for Poland and other East-European countries, FSO offered another two versions with a 1.4-liter and a 1.6-liter, respectively. All versions were exclusively paired to a 5-speed manual gearbox. 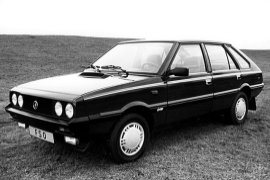