Before the Iron Curtain fell at the end of the '80s, most communist countries from Eastern Europe had at least one national car brand.

The only exceptions were Hungarians and Bulgarians. In Poland, the Government already had a deal with Fiat since 1932 so they went on and continued their business after WWII. In the mid '70s, Fiat and the Polish Government worked together and made a new generation of vehicles, called the FSO Polonez. Production started in 1978.

The base FSO Polonez Kombi prototype was shown in 1998 and the production started in 1999, under a joint-venture between FSO and Daewoo. The engine was based on a 1987 Polonez 1.6-liter unit, but with fuel injection. Strangely, the fuel-injected version had less performance than the original carbureted version. It was even worse than a Daewoo 1.5-liter engine. It had 80 hp and only 125 Nm (92 lb-ft) of torque. The car had a weight of 1160 kg (2557 lbs) and it had limited success.

By 2002, only a few Kombi models had been made when the factory closed down. Daewoo stepped back from Poland and the company shut its doors. FSO remained a former glory of the Polish automotive industry, even though it failed to produce anything better than a good, for 1978, vehicle. 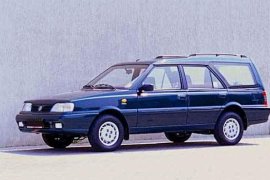