Ford introduced the fourth generation of the Zephyr on the market in 1966, and, at the same time, it unveiled the model's luxury version, the Zephyr Zodiac.

Although the two models were, basically, the same vehicle, the Zodiac was almost a premium vehicle for its times. It looked different and sported options that were unavailable for the regular Zephyr lineup. Ford started to work on the MKIV Zephyr/Zodiac in 1961. It insisted on getting new technologies on the car, such as the rear independent suspension, an alternator instead of a dynamo, and even a cigarette lighter. Even though the Zodiac was the upmarket model, it was offered in two trim levels, with the Executive being the full-options one.

The biggest exterior difference between the Zephyr and the Zodiac was the front fascia. While the Zephyr featured two headlights, the Zodiac sported a dual-headlamps system. Both versions were adorned with a chromed metallic grille and chromed bumpers. Unusually for those times, the cars featured fender-mounted rear-view mirrors on both sides.

Inside, the Zodiac featured two bucket seats at the front and a bench in the rear. A tilt mechanism was fitted as standard for front seats. The dashboard was padded on the upper side, while the front side was flat and sported an instrument panel with more gauges than the Zephyr. Ford advertised the ammeter as an important gauge.

Under the hood, Ford dropped a 3.0-liter V6 engine paired to a three-speed automatic gearbox. A no-cost option for a four-speed manual transmission was offered. 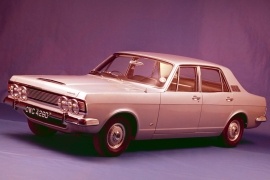